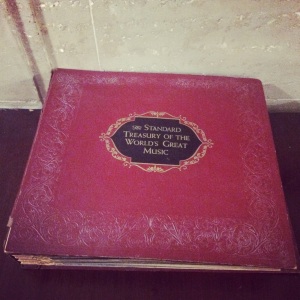 You can imagine how pleased I was when I stepped into my building’s lobby the other day and was greeted by what appeared to be The Book of Shadows sitting on the communal table by my elevator. It’s kind of a thing in this building – people leave their old crap on the table downstairs in the hope that their 1970’s guide to parenting or half-consumed jar of Nutella will go to good use, insead of where it belongs (in the trash).

Sure, the cover of the book says that it’s something benign, pleasant, even: The Standard Treasury of the World’s Greatest Music. With that being said, I’m pretty sure that given its faded, burgundy cover and spooky vibes that this book contains all of the secrets to the world’s evil and should never be opened by the weak, fleshy hand of a mortal.

We’ll put it like this: I just hope that B and I are out for a walk with Jack when some idiot finally comes along, opens the book and transforms our building from the nice, naturally-occurring-retirement-community that it is now into a portal to hell.

Started from the bottom now we here